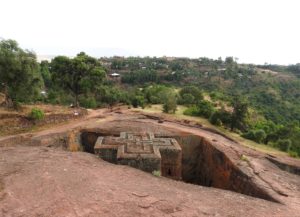 Project Recipient: World Monuments Fund Project Amount: $960,000 CAD Studying our history and reflecting on the past is a unique human prerogative which allows us to learn from our mistakes and build on our wisdom. Overall as a species, we have a great appreciation for our past and a sense of pride in what we have achieved; the physical relics of our past are a testament to the diversity of our cultures and the evolution of our abilities. Careful conservation of these relics allows modern people to celebrate human brilliance, potentially in perpetuity, and will one day allow future generations to admire today’s achievements. Founded in 1965 by “individuals concerned about the accelerating destruction of artistic treasures around the world”, The World Monuments Fund (WMF) is a US nonprofit with affiliate organizations in Britain, India, Peru, Portugal, and Spain working to preserve cultural heritage sites around the world. Recently, WMF’s work extended to Cambodia, Ethiopia, Iraq, and Mexico through the funding provided under the CAF Canada project, “Training in Restoration Skills and Heritage Management Education for the Developing World”. The organization undertook various restoration projects while also training locals to maintain, conserve, and restore traditional buildings and archeological sites, with the ultimate goal of fostering long term local stewardship. The training offered by WMF often extends beyond physical skills and includes workshops and seminars for those considering pursuing a career in architecture, building & geological engineering, archeology, and other related disciplines. Cambodia The WMF has been present in Angkor, Cambodia since the 1990s, at a time when Cambodia was still re-establishing itself after the brutal Khmer Rouge regime. Invited by the Cambodian government to evaluate the structural conditions of the ornate structures, it was apparent that the important cultural and spiritual site would become a focal point of the country’s tourism industry. Over the years, the WMF has expanded its original training program from focusing on teaching young Cambodians basic conservation and documentation skills to include a 100+ strong local workforce, with some workers having over ten years of experience serving as site managers and supervisors. The program included advanced training for highly specialized skills including stone cleaning & conservation, preparation of mortars for restoration, lead working and safety, structural pinning of rock, and documentation techniques.  For example,  in conjunction with WMF’s conservation efforts on the Churning of the Sea of Milk Gallery, the program provided training on wood conservation. Funds also went toward administering trainings for 17 staff members of the Authority of the Site and Management of the Region of Angkor (APSARA) in documentation and planning techniques and and 32 in security and protective measures for the cherished heritage site. Finally, workers from similar conservation efforts in Thailand were invited for site visits, fostering open conversation and knowledge sharing between the two groups. Ethiopia The mountainous Lalibela in Ethiopia hosts one of the first  sites added to the World Heritage List in 1978. The churches of Lalibela—11 monolithic structures carved from desert stone—first became a project of the WMF in the 1960s & 70s, with efforts being re-initiated in 2007. Endeavouring to develop a solution that is sustainable under the future patronage of  the Ethiopian Orthodox Church and the Authority for Research and the Conservation of Cultural Heritage (ARCCH), the WMF engaged with local trained craftspeople and several universities to encourage these stakeholders to support long term preservation needs. In 2017, funds from CAF Canada donors were used to run an intensive, week-long field course on stone conservation with eight graduate students from Addis Ababa University. This in-depth training program is not offered through other universities in Ethiopia and was therefore crucial to the professional development of these young heritage restoration professionals. Iraq In Erbil, in the Kurdistan region of Iraq, the WMF first began offering heritage management training courses to staff members of Iraq’s State Board of Antiquities and Heritage in 2013 and then again in 2014-2015. The numerous sites in the region warranted  a third cycle of training courses, and using funds from CAF Canada donors, the WMF began the third cycle of trainings in 2017. The two 6-week courses introduce would-be specialists to the heritage movement before moving into a wide variety of applicable and practical courses including digital documentation and site representation, as well as geospatial documentation and map-making. The WMF is also adding the benefit of its experience in helping the Iraqi authorities in their restoration of the legendary city of Babylon by bringing several experienced alumnus from previous training cycles to provide professional assistance. In July, August, and November 2017, funds from CAF Canada were used to run three heritage management workshops for local Iraqi professionals. The workshops were partly focused on working towards achieving World Heritage status for the Babylon architectural site – an honor which, despite its historical importance, has not previously been granted. By repositioning the site on the submission dossier as a cultural center of the region and highlighting its physical attributes & engineering feats, the ancient city of Babylon was first accepted as a World Heritage site in January 2018. Mexico Set in the earthquake-prone Oaxaca Valley, Monte Albán is one of the earliest cities in Mesoamerica. Founded in the sixth century B.C. and inhabited for over 1,500 years by the Olmecs, Zapotecs, and Mixtecs, the site’s impressive remnants represent the civilizations who once dwelled there. The WMF mobilized conservation efforts to Monte Albán following the devastating earthquakes of 2017. A total number of 15 structures were severely affected by the damaging tremors, requiring immediate restorative work. The funds made available through this CAF Canada project were utilized to develop a disaster response and restoration program for the site, in partnership with the Instituto Nacional de Antropologia e Historia and local universities, which will eventually include physical conservation, documentation, and geological assessment efforts.

The importance of the work WMF undertakes cannot be overstated. The restored monuments,  symbols of our cultures, nurture our national identity and facilitate future development by contributing to the thriving of industries such as tourism. The WMF strives to encapsulate these wonders for current and future generations, working on dozens of projects in countries all around the world.