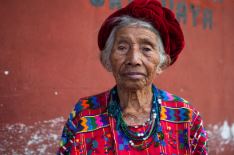 More than 1 in 3 women have experienced violence. These figures can vary from society to society, but what appears to be universally applicable is that poverty and violence often go together. Despite recent global outcries against violence towards women, it happens in every society and not enough is being done to put and end to the problem.

Everywoman Everywhere heeds the call. Founded in 2012, the organization is a global coalition of over 2,000 women’s rights activists, organizations, scholars, and concerned citizens from 143 countries, rallied around a singular goal: to advance an international treaty to prevent violence against women and girls around the world. Recognizing that most often, these victims have little legal support and may suffer discrimination for speaking out, the organization was formed to give these women a voice.

The goal of campaigning for a global treaty on violence against women and girls is to establish clear global minimal standards that outlaw violence against women and girls and provide the victims  access to a legal remedy should their human right to a life free of violence has been breached. CAF Canada and Everywoman Everywhere joined project focused on initiating hhase 1 of working towards thisplan; consulting with 500 human rights experts from every major geographic zone in the world to begin building the framework for a global treaty. This Core Platform is developed in accordance with the existing international treaties and resolutions impacting violence against women, and considers women’s access to protection or legal backing around the world.

Each expert convened and shared the Core Platform with their respective stakeholder communities via group meetings to receive feedback and ensure that the most accurate and pertinent information was considered and that marginalized communities of women are represented in the treaty.

With the Core Platform drawn up in accordance with UN frameworks & standards, Everywoman Everywhere will begin phase 2 and facilitate meetings with heads of states around the world to discuss ratification and implementation of the treaty. This “Coiling the Spring” phase also revolves around increased endorsement by international NGOs and the championing of the treaty by twenty lead nations. Everywoman Everywhere has great hopes for this approach as other issues have been previously tackled in a similar fashion with great success (see  international treaties against tobacco abuse and removal of landmines).

With global movements such as #MeToo rising to the cultural forefront in the last year, the time is ripe for nations to come together under one flag for the rights of women.