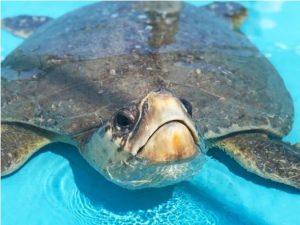 Oceans and seas cover more than two-thirds of the planet’s surface. The amazing and diverse ecosystems that thrive in earth’s waters are a vital barometer of its overall health. Worryingly, in the past century or so, these ecosystems have felt the brunt of the devastating effects of pollution and climate change.

Sea turtles, in particular, have become a symbol for the plight of marine animals and the ecological preservation efforts necessary to protect them. Human activities have directly resulted in five of seven species becoming vulnerable or critically endangered; overfishing, habitat destruction, climate change, and pollution being the main human threats to sea turtles. Despite regulations to counteract the decimation, the sea turtle remains one of the ocean’s most at-risk animals.

CAF Canada donor funds supported the purchase of two satellite transmitters for LMC’s  “Satellite Tracking of Rescued and Rehabilitated Sea Turtles” program. The satellite transmitters provide data regarding the migratory patterns of the sea turtles after they have been released. By monitoring their movement patterns, dive behavior, and habitat, marine biologists have been able to further develop rehabilitation methods and gather vital information for aiding the survival of the species.

On April 7, 2018, the Center met one of its most beloved rescue success stories. Honda, the Loggerhead, was found in the St Lucia power plant intake canal suffering from malnutrition and a spreading infection. Named after the Honda Classic Cares Foundation (which underwrites a portion of the Center’s education programming), Honda was carefully nursed back to full health and, on November 28, 2018, was successfully released into the ocean.

As male loggerheads are rare on land, tracking Honda has been a great resource for the research team at LMC examining the male turtles’ life patterns. You can monitor Honda’s movement and behavior at www.marinelife.org/tracking.

To further their mission of promoting conservation of ocean ecosystems with a special focus on threatened and endangered sea turtles,  the Center hosts free summer & winter camps and guided tours of the LMC facilities, which are attended by over 350,000 visitors annually. Additionally, LMC holds volunteer events such as “Blue Friends Beach Cleanup” and gives the public the opportunity to adopt a sea turtle by supporting their patients.

By combining scientific rehabilitation efforts with grassroots advocacy, and  education campaigns, LMC is making real waves in sea turtle conservation. It’s important to remember that the more we learn about animals like Honda, the better equipped we are to tackle conservation efforts across the globe by sharing information, refining processes,  and using the results to achieve a holistic approach to true sustainability and the health of our oceans.