Putting Mental Health at the Top of Mind 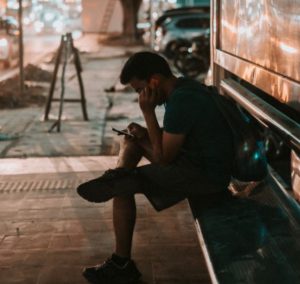 Mental health problems affect nearly every person on earth at some point in their life. They negatively impact our cognitive, emotional, and behavioral well-being and can lead to isolation, depression, and suicide. Despite the near-universal prevalence of such issues, an alarming amount of people decline to ever seek help. In some damning statistics, suicide is currently the 10th leading cause of death in the United States, has risen by 11% in the last year in the UK,  and the second leading cause of death for people between the ages of 15-29 worldwide.

There is some evidence that the rise of social media has only contributed to an increase in serious mental health issues over the last several years. Although cases related to cyberbullying are a particular focus in the public eye, issues such as anxiety, loneliness, paranoia, and obsession potentially linked with social media use cannot be ignored.

Launched in August 2013 as an offshoot of DoSomething.org, SHOUT in the UK is a free, 24/7 support system for people experiencing a mental health crisis. SHOUT connects people of all ages throughout the UK with trained volunteers via text message.  All they need is a UK-registered cell phone, which means over 60.5 million people are able to access these services. The medium of texting—rather than calling or seeking help in person—may seem to be a rather interesting choice, however, it was strategic.

All the text conversations are anonymous and reviewed by a panel of qualified psychotherapists.“Texting is private and silent, it opens up a whole new way to find help. It provides instant support…anytime, anywhere” said Prince William, Duke of Cambridge and Principal of the Royal Foundation, which helped to bring SHOUT across the Atlantic to the UK.

Some of the critical mental health issues SHOUT tackles include suicide prevention, depression, loneliness, anxiety, bullying, emotional abuse, and self-harm. With CAF Canada project funds, the organization provided training and psychological support to volunteer counselors at the Crisis Text Line. According to SHOUT’s projections, by the end of 2019, the organization will respond to over 18,000 texts per month.

SHOUT has similar organizations and services available in the US, Ireland, and South Africa.