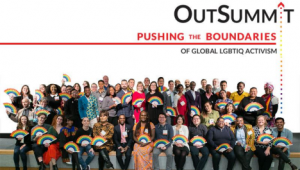 LGBTI activists from around the world at 2019 OutSummit (Photo credit: Brad Hamilton Photography)

Across the globe, members of the LGBTI community continue to experience discrimination and numerous forms of abuse. While there has been substantial progress in the social acceptance of this diverse group over the last decade, a long path remains for public policy to actualize LGBTI equity, inclusion, and equal rights.

For 30 years, OutRight Action International, an advocacy organization headquartered in New York, has countered attacks on free expression using the world’s biggest and most diverse forum—the United Nations. As the only LGBTI organization with a recognized consultative status at the UN, OutRight builds awareness about the circumstances and challenges of LGBTI people and the imperative to secure their basic human rights globally. The organization propels its mission forward by partnering with thousands of activists and influencers worldwide to identify the most effective and contextually-appropriate strategies to change not only hearts and minds, but policy.

Speakers and activists travel from around the world to New York to attend the annual OutSummit, a one-day conference during UN General Assembly Week (UNGA), to discuss critical issues impacting the LGBTI community. In 2019, funding from CAF Canada donors enabled activists from Barbados, Belize, China, Fiji, Lebanon, and Tunisia to attend the event. OutRight brought together 260 activists, academics, government representatives, private sector representatives, international human rights officials, and others to share perspectives on cross-cutting issues and solutions. The diversity of voices exemplifies the change that OutRight wishes to see in society.

For LGBTI advocates, among the many benefits of attending the OutSummit is the opportunity to meet with policy-makers. OutRight’s orientation includes a comprehensive training on how to effectively engage with the UN system in New York. International LGBTI leaders work to set meetings with UN missions and agencies and contribute their experience and insights to awareness-raising events.

OutRight Action International also hosts a public event during UNGA to draw attention to human rights violations against the LGBTI community. The focus in 2019 was hate speech, a challenge that requires cross-sector allies and their active support to confront. The opening remarks at the event were made by Xavier Bettel, Prime Minister of Luxembourg, who shared, “Being gay was not my choice. But not to accept it is a choice. And to accept myself was so difficult. I don’t ask people to judge, but to accept. Homophobia [and transphobia] is a personal choice, and we have to fight against it.”

For a movement built on the tremendous efforts of activists, the path to progress through advocacy is a proven strategy—one that OutRight Action International and its many global influencers are translating into action.